At the Royal Oak, Dolton – walkers and support team making almost 50 people gathering for lunch and a pint. There’s a bit of reluctance in evidence among the ramblers as we get ready to set off for the afternoon – we’ve already done 12 miles this morning. We walked the Tarka Trail from Great Torrington where last night we played at the Plough Arts Centre. A great venue and a show which featured some new songs of mine as well as lovely interpretations of traditional songs by Rowan.

All that came at the end of a day of walking yesterday in mainly glorious sunshine – though we were caught by a shower at the end. We came from Barnstaple along the Taw estuary and then the Torridge – also on the Tarka Trail. Lots of people, a great atmosphere and a beautiful walk but hard on the feet on a tarmac cycle track. A real contrast with the first day’s walking on Sunday. That was the heavyweight day: Exmoor’s sodden turf, wild ponies in the distance, and 50 walkers, heads down into the driving rain. We were revived by a barnstorming gig in Barnstaple at the North Devon Beer Festival. Lundy Gold Ale and crazy dancing – which began during new song “She Wrote Her Name” and built to a conga during the tune set. It’s great having Lindsey Oliver joining us on stand-up bass, adding a real depth to the sound. She’s walking with us this afternoon, too.

On to Hatherleigh! JJ 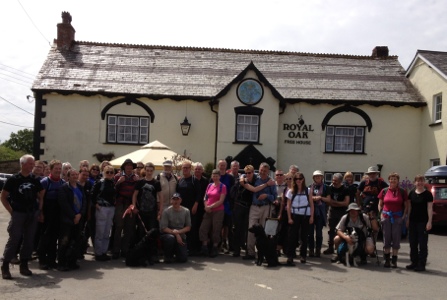